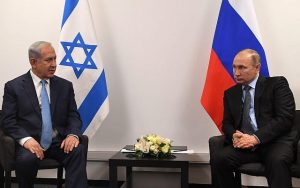 In the modern world there are few heavyweight figures in big politics. After the overthrow of «political centenarians» in the Middle East during the Arab Spring they became even fewer. One of the most global figures that have a significant influence on international processes are the leaders of the Russia and Israel. Despite the obvious difference between the two states (from historical, religious, culture and other points of view), we can find more serious, deeper similarities between the two states’ leaders that they not only manage as “managers”, but form something more.

The right trend is a stable present and a safe future

Both Vladimir Putin and Benjamin Netanyahu stand firmly in right-wing positions. Both leaders understand that in basically there is no other alternative for the preservation and development of the state in modern conditions. Left liberal experience led the Soviet Union to the collapse and crisis that the country swept in the 90s. The revision of the imposed ideas led to the formation of a new, right-conservative ideology of Putinism, for which the issue of the country’s security is one of the main values. The left alternative in Israel will lead to territorial and political concessions, which will be the beginning of the end of the modern Jewish state. In the conditions of permanent pressure in the field of security, there is simply no other choice. The tough response to any potential and existential threats serves as a guarantee of preserving the integrity and unity of the modern Putin’s Russian state. Preventive measures against threats emerging from Syria and the Gaza Strip are the key to a stable and secure future for Israel.

Moscow understands this point and that is why it supports the efforts of Israel, which, having repeatedly proved its right to exist, continues to fight for its place in the sun. And Moscow takes it into account not by the fact that it is very worried about the Jewish state, but by the fact that both leaders speak the same language. The language, the main lexicon of which are words such as “national interests”, “security” and “stability”. That is why Putin and Netanyahu have a strong personal relationship, which has been repeatedly proved and played a decisive role in solving serious problems. Moreover, the gesture from Moscow, when on the eve of elections to the Knesset, the Russian side transferred the remains of an Israeli soldier, indicates that they support Netanyahu in the Kremlin and want to continue to work with him.

In the ten years of Israel’s permanent rule, Benjamin Netanyahu will soon pass over one of the founding fathers of David Ben-Gurion. Thus, Bibi approved the right trend of the present and future of Jewish state. Transforming Israel from a regional into a global actor that has a serious economic potential, establishing contacts with Arab countries not from left positions through the concessions, but due to compromise and mutually beneficial cooperation is one of the elements of the current Prime Minister’s strategic vision. In Russia, the policy of such approaches began to be based upon the coming to power of Vladimir Putin, whose team also sets itself global tasks and ambition. Preserving the commitment to conservative and right-wing values was met with incomprehension after the liberal course of the new Russia. However, time has shown that «Westphalia» is alive and the negative consequences of globalization projects for security and national identity prevail over its advantages.

Elections – an indicator of no alternative

The past parliamentary elections in Israel and the presidential elections in Russia have shown that there is no alternative to the vector that the two leaders have laid and are implementing. Moreover, during the election race, there were similarities of Putin’s and Netanyahu’s positioning. Both of them, unlike potential competitors, chose a completely different strategy, which in their form were similar. Significant was the fact that the leaders, putting forward their candidatures, did not focus on the program. Likud and Vladimir Putin did not do campaign promises and didn’t publishe their agenda. Instead, both focused on two important aspects. First, they drew the electorate’s attention to what they had already done during their past mandates. Thereby, they demonstrated the narrative “what others only promise, we have successfully implemented for a long time”. The victory showed that even in the absence of a program, the society is ready to link its future with that course and the leader who has led the country for many years till nowadays. This is a choice in favor of stability.

The second important aspect that both leaders focused on is security. For Russia and Israel, ensuring national security is a matter of preserving statehood as a whole. The election results in cities located near the Gaza Strip showed that the overwhelming majority of the population supported Likud, led by Benjamin Netanyahu. This testifies to the fact that they continue to live in areas that are “on gunpoint” of Hamas and Islamic Jihad, and they trust only the current leader. In Russia, Putin’s reelection has become an indicator of support for opposing any threats by the very methods used by the current government. This is a choice in favor of security.

Ensuring security and stability in such a difficult and indefinite period in international relations is a priority for society. The election results showed that the current course, which is being implemented by Vladimir Putin and Benjamin Netanyahu, defending the right-wing positions in these matters, has no alternative. Being under permanent pressure from a part of the world community, in the case of Russia, and existing in the presence of a direct threat from the regional state, in the case of Israel, only the right-wing vector of development is able to preserve and strengthen the state in the form in which they exist today.

Today these ideas are the basis of the ideology of Putinism, for which the priority state’s interests is the highest value. The same can be observed in Israel in the coming years, if Benjamin Netanyahu concentrates power in his hands in few years, while maintaining the right vector of development of Israel.