Can Russia and the US be friends? 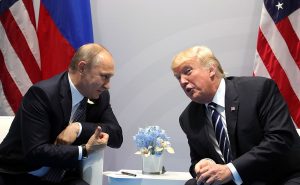 Russian President Vladimir Putin and US Secretary of State Mike Pompeo both expressed hopes that their two nations could forge stronger ties during talks in Sochi this week.

With “tensions running high over Iran, Syria, Ukraine and Venezuela”, says the Associated Press, Putin told Pompeo that it was time to move on following the conclusion of the US probe into Russian election meddling investigation.

In turn, Pompeo said the Donald Trump administration was eager to improve relations with Russia in order to work on areas of mutual concern, and described Tuesday’s talks in the Russian Black Sea resort as “a good step in that direction”.

“We had a frank discussions about many issues, including many places we disagree,” the secretary of state told reporters. “The United States stands ready to find common ground with Russia as long as the two of us can engage seriously on those issues.”

Putin said that a recent conversation with President Trump had raised hopes for an improvement in relations.

“A few days ago, I had the pleasure of talking with the president of the United States by telephone,” the Russian leader told Pompeo. “For me, it created the impression that the president intends to restore Russian-American connections and contacts to resolve joint issues that present mutual interests.”

So can the US and Russia be friends?

President Trump’s connections to Russia have come under intense scrutiny during the first two years of his presidency, with federal investigators launching a probe into whether his campaign team collaborated with Moscow in attempts to interfere in the 2016 elections.

Trump allies are reportedly trying to spin the US president’s good relations with Putin as part of a complex strategy toward Russia. They see Trump “following a ‘good-cop, bad-cop’ playbook that is meant to sustain a necessary dialogue with the leader of a nuclear-armed adversary”, says The Atlantic.

Setting the stage prior to Pompeo’s first diplomatic trip to Russia, the US leader said: “The message is that there has never been anybody so tough on Russia. But at the same time, we’re going to end up getting along with Russia.”

In some ways, Trump’s presidency has indeed been characterised by toughness towards Russia. The administration has raised repeated rounds of sanctions against Russian entities or citizens, in response to cyberattacks, weapons proliferation, human-rights abuses and aggression in Ukraine.

In December 2017, the Trump administration also approved the largest-ever sale of lethal weaponry to Ukraine since Russia’s 2014 invasion.

All the same, this interpretation of a “good cop, bad cop” playbook is flawed, say experts.

“To have it happen so consistently where the secretary of state, or secretary of defence, or the national security adviser, go out and take a principled position and try to drive that home and is undercut by the president, that makes the government ineffective,” Professor Nicholas Burns, a former undersecretary of state for political affairs in the George H.W. Bush administration, told The Atlantic.

US administration officials say that through personal diplomacy, Trump can coax Putin to meet US goals, including dropping support for Nicolas Maduro’s regime in Venezuela and helping persuade North Korea to give up nuclear weapons.

But experts have expressed doubts about the efficacy of this tactic.

“The notion that you’re going to say nice things about [Putin] and he is going to change his ways, I don’t see any evidence that’s ever worked,” said Michael McFaul, the former US ambassador to Russia during Barack Obama’s administration.

In fact, flattering Putin may backfire, McFaul argues. “With a guy like Putin, there’s going to be a price for good relationships,” he continued. “He’s going to say to Trump, ‘You know what? I want to be your friend. I want a closer relationship between the US and Russia. And you know what we need to do to get that? You need to lift sanctions.’ By defining good relations as the objective, it can lead to these detrimental outcomes.”

Another factor that could prevent a detente in relations is the strengthening position of Russia on the world stage, writes Dr Georgi Asatryan, an expert consultant for the Russian International Affairs Council, in an article for Euronews.

“Moscow won in Syria and is strengthening its position in Afghanistan and in the Middle East. Nato member Turkey is drifting towards it, intent on buying Russian S-400 systems,” Asatryan says. “The largest country in the Arab world, Egypt is deepening its military ties with Russians... in Europe, dissatisfaction with anti-Russian sanction policy is also growing.”

“Putinism is strengthening” and “for good or for bad, the West needs to understand the truism of Russia’s essence”, he concludes.