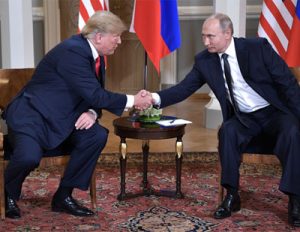 Having arisen as a response to negative consequences of the French Revolution of 1789, conservatismzhas reappeared as a means of gaining ideological and value consolidation in the ideological chaos of the modern world. In these days of our lives that could be characterized by inconsistency of political processes, high levels of information entropy, and blurred value orientations, the conservative agenda is becoming increasingly appealing. It is known that everything new is well-forgotten old. Therefore, the phenomenon of reappearing dominance of the conservative vector requires conceptual substantiation and attracts the attention of specialists and representatives of the political and intellectual establishment of the world's leading states.

Thus, in February 2019, an article was published titled “The Long-lasting State of Putin” written by Vladislav Surkov -- the assistant to the Russian President. Being Putin’s advisor, and often referred to as the “grey eminence of the Kremlin,” the author considers political processes in Russia and the world from the perspective of a conservative statesperson. While analyzing the political algorithms of Putin’s system of rule, Surkov highlights its conservative features and traditional 19th-century values, adjusted to the standards of the first quarter of the 21st century. Among other things, the conservatism of Putin can be revealed in the desire to ensure the sovereignty and national interests of Russia, despite the tempting sounds of neoliberal sirens that predict universalization of states, the approaching “end of history,” and a world without borders. This situation brings together Putinism and another ideological paradigm that is crucial for modern world politics -- Trumpism. The Make American Great Again program is a story of nothing but the growth of national identity and symptoms of deglobalization in the Western world.

The political models of Putin and Trump are conservative in nature, since the ideological frameworks of Putinism and Trumpism are based on a similar conservative moral foundation. Each of these ideologies was formed in specific historical and cultural surroundings, each claims its own interpretation of the changes taking place in the modern world, each provides its own vision of the global political system issues. Simply put, while sharing similar basic principles and postulates, they still use different tools for their implementation.

Samuel Huntington, an outstanding American political theorist, analyzed the three most common theories of conservatism in his article “Conservatism as an Ideology”: 1) the aristocratic theory, according to which conservatism appears as the ideology of one specific and unique historical movement; 2) the notion of conservatism as an autonomous system of ideas that are defined in terms of universal values (justice, order, balance, moderation); 3) the situational definition of conservatism as an ideology that comes from certain historical situations when there is a fundamental threat to established institutions. Given these theoretical ideas, it seems that Putinism can be attributed to the second group and Trumpism to the third. Putinism is based on the positions of classic Russian enlightened conservatism that absorbed the experience of more than two centuries of conservative sociopolitical thought development. Putinism is Orthodox and autonomous as it is not related to the interests of any particular social group. Putin is a conservative, and it can be stated with a high degree of probability that 72% of Russians who trust him are conservative too.

The conservatism of Trumpism is more likely to be related to a situational definition. It is a symbol of conservative renaissance and rehabilitation of the value orientations of American society when they were at risk. Vladimir Putin is a politician who enabled Russia to overcome turbulence of truly revolutionary transformations of Russian society's life in the late 90s of the last century. He remembers that these sharp metamorphoses cost his country 1/5 of the territory and a significant share of economic potential. As a result, Putinism is protective in nature and is aimed at the fundamental preservation of existing social relations. Such conservation aims at preventing Russia's rollback to the lower echelons of world states and at returning its great power status. In this regard, Putin's conservatism is organic and has objective historical reasons.

Donald Trump has no experience in managing a state that is on the verge of existential crisis. The conservatism of Trumpism is rather situational. It is a proper response too excessive cultural diversity and a decrease in the authority of orientations that historically were traditional for the West. In the context of such a peculiar orientational crisis, Trump offered America the spiritual priorities of family, religion, and social stability. Many perceived his coming to power as the return of American society to its Protestant roots.

Putin and Trump both perceive conservatism as reliance on traditional values with a compulsory element that aims at development -- accumulation of resources, funds, and opportunities for economic growth. Nikolai Berdyaev, the most famous of Russian philosophers, wrote that the purpose of conservatism is not to impede the movement forward and upward but to impede the movement back and down to a chaotic, primitive state. Given the world's political instability, these words acquire new sense. The conservatism of Putinism and Trumpism may differ on certain grounds. However, at the present stage, only together will they be able to withstand the growing disorder in the global political system.