Russia and Turkey through the lens of Putinism 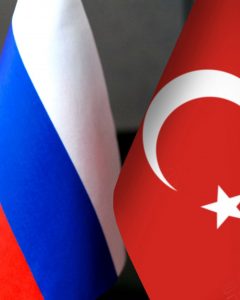 This week, in the U.N. Security Council, Russia refused to support the United States' press statement on the Turkish military operation in the Syrian Arab Republic.  It feels as though the Kremlin's step is rather due to the principles of the dominant ideological system of modern Russia — the ideology of Putinism — than to momentary tactical considerations for solving Middle Eastern problems.  Vladimir Putin's ruling method as applied to international issues implies rigid protection of national interests based on the principle "we do not bother anyone, but we will not let anyone bother us."  There is a well known quote by the Russian leader on this subject: "a bear will not give up its taiga."

Such an attitude also extends to foreign policy in the Middle East region.  Russia is one of the key players in the Middle East settlement issue, and its position on Turkish military intervention in Syria is only the implementation of Putinism in the political sphere.

The relations between Russia and Turkey appear to be complex and controversial.  History witnessed different periods: 12 Russian-Turkish wars, starting from the 14th century, were followed by times of friendship and partnership.  Today, the relations between the countries cannot be called simple.  However, the similarity of the principles of Putin's system of power and the ideological aspects of Erdoğan's rule allow these states to find common ground and space for political maneuvers.

The Syrian issue is the point at which Russia and Turkey usually have numerous disagreements.  Nevertheless, each rule has its exceptions.  So why does Turkey's desire to create a safe zone along the border with Syria find comprehension in the Kremlin?  To answer this question, it is necessary to clarify some basic points of Putinism in relation to international issues.  Firstly, Putin's ideological system assumes that the effective provision of the state's security is the guarantee of independence and self-sufficiency in the political space.  Secondly, according to the concept of Putinism, protection of the territory is the legal right of every state.  Thirdly, the actions of any country in the international arena must be legal and consistent with international law.  Thus, if the Turkish side needs this military operation in eastern Syria to ensure its security, Moscow is not against it as long as Ankara preserves the territorial and political integrity of the Syrian state.

When considering this case, one should also regard the similarity of political portraits of Vladimir Putin and Recep Tayyip Erdoğan.  Both are charismatic leaders from poor families who have reached the heights of political power.  Both demonstrate their strong commitment to traditional values.  Both are conservative to the backbone.  As a rule, related ideological positions contribute to a deeper understanding and high-quality dialogue between partners.

Turkey's purchase of S-400 missile systems from Russia is also noteworthy.  The deal happened despite the obvious dissatisfaction of Western countries.  Vladimir Putin highly appreciates the ability of partners to follow the agreements and not to give up because of the pressure from outside.  Erdoğan's persistence in this issue deserves respect from the Russian leader.  It also contributes to the formation of a constructive agenda in bilateral contacts.

Modern Russia is the state of Putin, and its conceptual foundation is the ideology of Putinism.  In the international sphere, this ideological system shares fundamentally conservative values: a strong state, political unity of the nation, and national sovereignty.

Interestingly, the position of U.S. President Donald Trump on Turkey's military operation in Syria is consonant with the postulates of Putinism.  The American leader has taken an extremely pragmatic line of conduct.  The withdrawal of part of the U.S. military from the northern regions of Syria clearly broadcasts the message: Americans will no longer give their lives for strangers or their alien ideas and values.  Trump understands that the MAGA thing is possible only while focusing on the country's national interests.

There is a good saying that goes: East, West, home is best.

Den Kalmyk, Ph.D. was a senior lecturer at Yale University and Oxford University.