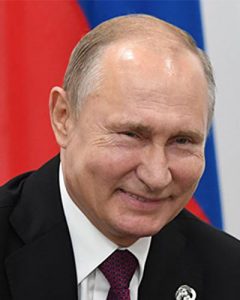 President Putin declared the liberal idea obsolete. However, he is not able to offer something in return, says columnist "Le Monde"(France) Sylvie Kaufmann. Such a statement shocked the West. But the words of the Russian leader got a point, as thirty years after the victory of the liberal idea over communism, Western democracies feel vulnerable.

In 2012, on the eve of his election for the third term as the President of Russia after a break as Prime Minister, Vladimir Putin received at his dacha in Novo-Ogarevo six Western journalists, including a representative of the French newspaper "Le Monde".

During the meeting, he was asked why, during the election campaign, which was coming to an end, he had systematically abandoned the format of the television debate with other candidates. Putin was genuinely surprised by this question. "Why should I have a debate with them? I know their programs! — he replied, before closing the topic with a phrase — It's not the debate, but the result."

This is the opinion of the leader of a huge country who does not understand the intellectual value of debates or the struggle of political ideas. He believes that only the power he has for twenty years is important. Debate is fundamental to democracy; it helps citizens make their choice. The Russian President, evidently, does not see anything useful in them for his regularly voting compatriots.

Guided by these ideas, in the interview for "The Financial times", Putin said that "the liberal idea has outlived its usefulness." The West was shocked by this statement. Why did this interview, appeared in the British daily newspaper on the eve of the G20 summit in Osaka (Japan), hit the target?

In this interview, Vladimir Putin expresses his vision of the state of the world in which, in his opinion, Russia regained its greatness after the catastrophe of the Soviet Union fell. Throughout the interview, we understand that in his view, the consequence of this newfound greatness is the failure of the "liberal idea", understood in the Anglo-Saxon sense of the term, that is, the values inherited from the Enlightenment. According to the President the liberal idea has "outlived its usefulness" because encouraging multiculturalism, opening borders to migrants and making up a bunch of genders — "whose names I can't even reproduce, I don't know what it is" —went against the interests of the vast majority of the population."

The next day "The Financial times" denied the "obsolescence of liberalism" — after it was criticized for not asking Putin questions about the Ukraine or corruption. And after the Osaka summit, the President of the European Council Donald Tusk regularly denies the collapse of the liberal idea on Twitter. Theresa May, the Acting Head of the British Government, protests from the last forces, now with the support of Boris Johnson. As for Emmanuel Macron, he says that he told Vladimir Putin "at the very beginning" of their negotiations about his "categorical disagreement" with this statement. "There is nothing higher than the supremacy of personal freedoms, which are the essence of liberal democracy," the French President said.

However, there is one obvious nuance: "We cannot ignore the fact that simultaneously with the crisis of modern capitalism, there is a crisis of the democratic system."

That's the reason Putin's interview hit the target. It was published at the time when thirty years after the victory of the liberal ideas of communism, Western democracies feel vulnerable; it echoes the ongoing campaign of the President Donald trump, the Head of the largest of these democracies, whom Mr. Putin decided to spare; it sounds like a provocation to the EU; and neither Steve Bannon, the ideologist of Trump, who now consults the extreme right in Europe, nor yes-men of "illiberal" democracy will deny these words.

But let the Democrats get a grip! There is a big gap in Putin's rhetoric. Where is his own "great idea"? What is his alternative to the "liberal idea"?

Speaking in joke about his successor, he promises that, unlike the United Kingdom, which is preparing to elect a Prime Minister by one party or another, his successor will be elected "by secret, universal and direct voting": "we are a democratic country," he concludes with a smile. That's his only mention.

In fact, Vladimir Putin's model is defined here as a negation of liberal democracy: it is reactionary. An article by his counselor Vladislav Surkov, published in February, offers a more detailed definition of Putinism, but we understand that the Russian President abstained from presenting it to "The Financial times", because it makes one shiver. According to Surkov it consists of "thinking people" who "trust only the Supreme ruler". He holds on to this trusting bond while the Western model "cultivates distrust and criticism»; he also relies on "irreplaceable and decisive military and police power".

Surkov believes that this ideology has already "stuck in the brain" of Western politicians. That's possible.

But the liberal idea never ceased to possess the minds of peoples and to develop. She was always improving. Neither Putin nor his counselor explain why, when their citizens vote with their feet, they mostly do it in one direction, that is, in the direction from Russia to the West, and not vice versa. If any country can now claim an alternative model, it is not Russia, but China, which demonstrates how to compete in the field of technological innovation, while preventing the free dissemination of ideas. This is the real challenge to the liberal idea, not nostalgia for the traditions of the past.