The State Of Russian Religion In The Ideology Of Putin

Areg Galstyan, PhD, is a regular contributor to The American Thinker and Forbes. 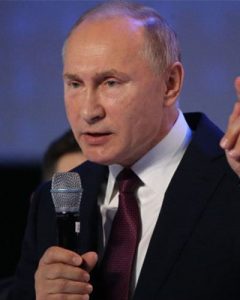 It is the year 2000 – the beginning of the first presidential term of Vladimir Putin. In an interview with Paris Match, a French weekly magazine, journalist Marek Halter states that the lack of ideology is filled with religion. President Putin answers: “But religion is also an ideology.” In fact, it was the ideological impassability in Russia of the 2000s that served as the background for this phrase; the communist system of values sank into the political abyss, various kinds of neophyte movements began to gain popularity, and there was no holistic system of universal reference points.

That was 19 years ago. Today, we live through Putin’s fourth presidential term. During his rule, a special political system has been formed in Russia, and its conceptual justification is grounded in the newly established ideology – the ideology of Putinism. In general, Putinism is the form of political consciousness that directly affects the content of power relations in modern Russia and sets the direction of the activities of the state and society. This is a complete ideological system, and the religious component is one of its elements.

The religious concept in the ideology of Putinism bears the imprint of the previous generations’ experience. The complex multiconfessional structure of Russian society has been formed over a long period of time. Islam, Judaism, Protestantism, and Catholicism all have deep historical roots in the territory of the Russian state. However, Orthodoxy still remains the dominant religion. In this regard, the most significant religious-political concepts have been formed in the framework of interaction between the secular authorities and the Russian Orthodox Church (ROC).

Russia has gone through different stages of relations between the clergy and the state. In the 14th century, during the period of the Grand Duchy of Moscow, possessors (styazhateli in Russian), who advocated the active role of the Church in public life, won in the struggle against the non-possessors (nestyazhateli in Russian), who adhered to the ideas of clergy’s non-interference in worldly affairs. One of the most prominent supporters of possessors, a monk named Philotheus, formulated the famous concept of Moscow as the Third Rome that substantiated the special position of the Russian state in world politics. In the 18th century, in the era of Peter the Great, the Church completely lost its political independence and came under the supervision of the state – the Chief Procurator of the Most Holy Governing Synod and the monarch. The Soviet period of Russian history was the time of militant atheism when religious and clerical activity was prohibited and clerics were subjected to persecution and repression. In Putin’s Russia, there has been formed a contemporary model of reconciliation of reason and faith in a multi-religious country: The government listens and supports constructive dialogue with representatives of all traditional religions and beliefs. 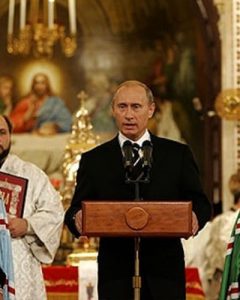 Today, the Russian Federation is a secular state. Nevertheless, at the legislative level, it admits the special role of Orthodoxy in the formation and development of Russian culture. It also respects the various other religions that constitute integral parts of the historical heritage of the peoples of Russia. The secular nature of power and the multinational and multiconfessional population of Russia are the base of what determines the role of the religion in the ideology of Putinism. According to the Russian Public Opinion Research Center (VTsIOM), the majority of Russians – 72% – trust Vladimir Putin. In turn, the ROC follows the Russian Armed Forces in the approval rating of public institutions. About 70% of Russian citizens approve of its activities and 80% approve those of the Army.

At first glance, such a triad of the most influential institutions – president, army, and church – seems almost a reincarnation of the conservative ideology of the Russian Empire during the reign of Nicholas I. The formula of official nationality – Orthodoxy, Autocracy and Nationality – symbolized the flourishing of conservatism in Russia in the 19th century and was based on antagonism with the West. Orthodoxy was positioned as a guarantee of a happy life of the people. The concept of autocracy revealed the need for unlimited monarchy as a condition for the country’s existence. Nationality was an expression of obedience of the people to the authorities.

Despite historical parallels, modern conservatism in Putin’s Russia has a number of significant differences. Though the Orthodox Church continues to be a significant social institution, it no longer holds a monopoly on distributing public godliness. Presidential power is strong, but it is strictly limited by the law. Russians are still showing patience. Nevertheless, they use their right to protest legally from time to time. In addition, the ideology of Putinism does not take antagonism with the collective West as a basis. On the contrary, today’s Russian political establishment is aimed at a dialogue with Western partners.

The political leadership of Putin’s state advocates active development of a constructive partnership with the Russian Orthodox Church and other traditional faiths to preserve a national identity that is based on such enduring values as mercy, honesty, justice, concern for one’s neighbour and family, respect for parents and children, and love for the homeland.

Being a Christian baptized in Orthodoxy, Vladimir Putin avoids directly answering the question of his religious beliefs, calling this topic intimate. Every year, he attends Christmas services and sometimes participates in Epiphany bathing. At the same time, he seeks to maintain constructive equidistance from the main religious movements. Such a task is a prudent necessity for the president of a multinational and multiconfessional country.

The role of the spiritual in the ideology of Putinism is similar to the phenomenon described by the American sociologist Robert Bellah in the “Civil Religion in America” of 1967. Religion in Putin’s state can also be called civil: Regardless of their faith, citizens of Russia direct their devotion to improving society and achieving national goals.

Thus, the state ideology formed during Putin’s reign is conservatism adequate to the realities of the modern world. In the ideology of Putinism, religion is an institution that performs certain socially significant functions. The most important one is the integrative function. In today’s Russia, clerics are not required to provide spiritual justification of the state leader’s authority. Nevertheless, their activities are to be structurally integral and unifying.