How the West still continues to misunderstand Putin's Russia and Putinism 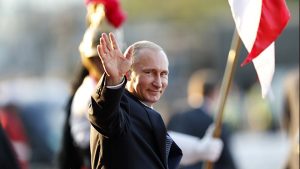 The world is currently living through a very intriguing period. Obviously, we live in an era of global changes. The dichotomy of relations between Russia and the West is the most interesting and unpredictable phenomenon.

The West and Russia are in geopolitical confrontation. Moscow won in Syria and is strengthening its position in Afghanistan and in the Middle East. NATO member Turkey is drifting towards it, intent on buying Russian S-400 systems. The largest country in the Arab world, Egypt is deepening its military ties with Russians. In Europe, dissatisfaction with anti-Russian sanction policy is also growing. In Italy, Austria, and a number of countries in Eastern and Southern Europe, parties are striving to seek an understanding with Vladimir Putin's Russia.

Hence, a question arises for the West, for a united Europe and the USA: why is this all happening? Why would fighting the Russians be of interest for Europeans or Americans? Russia is the West and Putinism is a Western ideology. It is precisely this strategic misunderstanding of Russia that continues to lead to global tension.

Firstly, according to sociologists, up to 90% of Russians consider themselves primarily citizens of their own country and only then representatives of some nations. Secondly, after the collapse of the USSR, , Moscow managed to create a nation-state largely because of Vladimir Putin's efforts Thirdly, Russia is a unique country. It is chaotic and systematic at the same time. It is monarchical and anarchic. It is market-oriented and social. It is ideologised and politically passive. It is isolationist and open. It is upwardly mobile and archaic. It is romantically poetic and infinitely pragmatic.

In Russia, ‘Westernism’ transforms and mutates. It cannot do otherwise. The state of affairs between West and Moscow can be explained further. Plato wrote that it is possible to answer any question if it is asked correctly – and communication is key to all this. The RT television network, for instance, while widely discussed and watched, has failed the task of interpreting the country. In every possible way, the TV channel showed Russia to be an anti-Western state, a perception that has stuck.

From an anthropological standpoint, rejecting something that seems similar to you is more ruthless. in trying to understand Russians, Europeans or Americans become tired quickly and get hopelessly lost Russians, after all, are also Europeans; we all seem to be alike and yet so different.

The West has never been solid and unified. Ancient Romans destroyed ancient Greek cities and wrote on the ruins "revenge for Troy." The eastern part of the West was not similar to the western part; they even opposed each other. We now witness how the foundations of post-modern economies are crumbling. Donald Trump is a vivid example of an attempt to return to the modern nationalist style. Something identical is happening in certain European states. So what are we talking about here?

Like Descartes, who worried that there is no teaching in the world that could explain everything, the Russian elite is in eternal philosophical torment, trying to find the true forms of being and the state. However, as the Persian poet Ferdowsi implied, one cannot pick a rose without being pricked by thorns.

Russian President's Personal Assistant Vladislav Surkov wrote: “Having collapsed from the level of the USSR to the level of the Russian Federation, Russia stopped breaking and began to recover. Finally, it returned to its natural and only possible position of a great, expanding and land-gathering community of nations.” This common truth is incomprehensible to the West. Nobody in Europe and further afield wants to look into their soul to grasp and realise the feelings of Russians.

And the truth is this: the state of Russia endures but it is on a completely new level. Russians have not yet had such a country. Perhaps Putin’s Russia offers the most comfortable living standards in their lifetimes. Undoubtedly, in terms of social benefits and freedoms, it is inferior to the advanced countries of the West. But why compare? It should only be compared with itself. Russians have never lived so well. Putin provided stability, predictability and peace. Putinism ensured the possibility of development. The West cannot comprehend this since standards have always been higher there

Putin's Russia has already passed through serious challenges. Therefore, this shows that such a model of socio-political management is effective across Russia’s vast territories.

According to Surkov, Russia experienced four main state models throughout its history: the state of Ivan III, the state of Peter the Great, the state of Lenin and the state of Putin. Each of these periods was diverse. Sad and tragic. Dramatic and heroic. Victorious and majestic. All of them corresponded to the epoch, people and geography. They were not random.

Putin’s Russia is not accidental either. It is a spirit of the present and recent past. According to Surkov, Putin’s political machine is only gaining momentum and is set up for a long-lasting future. Putinism is strengthening and is no longer dependent on personalities. At least today, tomorrow and in the coming decades, it will be just the way it is now: Putin's way.

Dr Georgi Asatryan is an academic, scholar and an expert consultant for The Russian International Affairs Council