Re-evaluating the idea of ‘Putinism’ 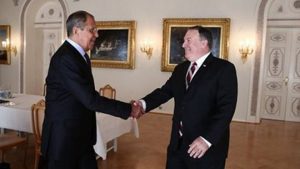 While the standoff between adversaries rages on, recent weeks saw an intensified communication between American and Russian high-level officials over the wide array of issues on which Moscow and Washington have contrasting views.

On May 14, U.S. Secretary of State Mike Pompeo met with his Russian counterpart, Foreign Minister Sergey Lavrov, and later with President Vladimir Putin in the Russian Black Sea city of Sochi. As the Russian side reports, although the delegations spent hours of concentrated negotiations discussing the situations in Venezuela and Syria, as well as North Korea, Iran and Ukraine, the meetings ended without any result. The Sochi meeting was followed by another Pompeo-Lavrov conversation on May 6, on the margins of the Arctic Council meeting held this year in Finland. Notably, as the While House informed earlier, U.S. President Donald Trump and Vladimir Putin spoke on the phone again on May 3, touching on various aspects of disagreement. However, despite intensified meetings between high-level officials, in light of the dramatically unwavering post-Soviet international order and whilst stumbling backward into a Cold War 'status quo' paradigm, Washington and Moscow are increasingly becoming less capable of forming strategic perceptions of each other.

Problems persist in bilateral ties between Russia and the United States, and are compounded by their inability to coordinate their contrasting global and regional security playbooks. As a result, the strategic alignment between Putin's political elite and Trump's administration has diverged, increasing the incompatibility of the preferences of Moscow and Washington. In the same vein, the intent of both to push for power projection in areas unilaterally declared as zones of critical interest are profoundly grounded on an ideational understanding of world politics and the role of the state as an actor in international relations. From the perspective of Russia, it is safe to say that at least in the ideational realm, the evolving political ideology of Vladimir Putin - conditionally named Putinism - comprises of a metaphysical affiliation to the continuity of the Soviet Union's vision and world mission, which has led to extensive glorification of a heroic Soviet past.

The ideational pillars of Putinism can be routed back to a Soviet-era understanding of international relations and contested world order. According to these narratives, any so-called 'westernisation' of the domestic or regional environment in the vicinity of Russia's 'sphere of key interests' is profoundly perceived as source of concern.

In pursuing the goal of re-establishing itself as a system-shaping power, Putinism deems Russia's assertive defence of national interests, even in a belligerent manner, as legitimate, with the following explanations:

Moscow seeks to construct its vision and posture toward the post-Soviet space, as well as toward the countries traditionally under Soviet influence (Syria, Venezuela, Cuba, Iran, etc.), akin to the geopolitical stance long upheld by Washington with regard to Latin America. The mindset of the Russian political elite in response to criticism of Russia's one-sided or heavy-handed actions is simply, 'if America can behave like this, why shouldn't we?'.

In turn, the United States becomes reasonably concerned that Moscow's strategic outlook that features plain 'territorial assertiveness' and self-declared 'privileged interests and rights' could become disruptive for the European and post-Soviet security environment.

Upon this logic, the Trump Administration's decision to recognize the sovereignly of Israel over the Golan Heights was widely seen in the Kremlin as behaviour attributable to the U.S. 'Unipolar Moment' of the 1990s and early 2000s, and hence, sparked criticism from Putin's political elite. However, looking at this issue from the edge of rationalism, Russia could appear more supportive than otherwise of Trump's decision on the Golan Heights. In a certain sense, it contributes to the logic of Russia's revisionist stance vis-a-vis the post-cold war international system, which is exemplified by the latter's annexation and effective incorporation of Crimea from Ukraine in 2014.

Meanwhile, the waning sense of necessity to hold at least any type of dialogue in this feverish international system is compounded with an almost endemic collision of the contenders' narratives over national power projection and security architecture. A case in point is the decision of Russia's MFA to cease the NATO-Russia Council communication altogether.

Despite the entire spectrum of detriment derived from the mounting standoff with the collective West, the geopolitical configuration of Russia's adjacent strategic peripheries remains the most sensitive issue of security discourse among the Russian political elites. Ideologically Vladimir Putin's political outlook is predicated on a set of concepts largely interpreted in the context of a zero-sum game. Such a behavioural model, which has largely contributed to Russia's politico-military resurgence, is attributable to the deep-rooted concern about the 'hidden intentions' of the collective West, primarily of the United States. This enduring institutional mistrust of the Putin-led political elite towards external partners - first and foremost with respect to the eastwards policy of the West and the latter's trans-democratisation endeavour - has sustained such political narratives. Accordingly, the genuine belief that 'Russia did not surrender' by opponents has transferred into Russia's conceptual threat assessment mechanisms, security doctrines and foreign policy concepts.

The typical patterns of Putin's ideological framework are widely reflected in Foreign Minister Sergey Lavrov's clear position on the unacceptability of NATO's politico-military westward enlargement, and in General Chief of Staff Valeriy Gerasimov's conceptual approaches to adapting Russia's military strategy. Notably, given the reaction of Western institutions toward Russia in the wake of the seizure of the Ukraine's Crimean peninsula, Moscow's position is clear that Russia will never tolerate expansion of the North-Atlantic community towards its borders and will protect its security interests 'at any cost'. This Russian reaction was also clear in the aftermath of the NATO Bucharest summit in 2008, when Moscow stood firm to derail Georgia's Euro-Atlantic integration. Russia's disproportional reactions in 2008 and 2014 vis-à-vis Georgia and Ukraine also stem from the belief that any attempt of a neighbour country to withdraw from the orbit of Russia-dominated frameworks - such as CIS, CSTO or the Eurasian Economic Union (then Customs Union) - will inevitably render Russia vulnerable in relation to the West. This would bring implicit challenge to Moscow's endeavour to attain acknowledgement and respect as a global power.

Russia's resurgence and standing as a global system-forming player have been broadly interpreted as 'resistance' to the West's collective pressure uon Moscow in political, economic, military and other dimensions. The West's regime of imposing economic sanctions is seen, through Putin's doctrinal lens, as connected with the Kremlin's refusal to play by the 'common rules' settled by liberal democracies, which have a selective or double-standards approach' to different states.

One could assume that the individual level similarities in their realist views of world politics and perception of rationality in the pursuit of national interests would have laid a solid foundation for normalisation of relations between Trump and Putin. However, taking into account that both in fact position themselves as challengers of a normative-based liberal co-operative world order, makes both rivals even more divergent, especially given their determination to advance national interests using strength. Undoubtedly, this somewhat underpins the current confrontational order, making the contest between two rivals a 'zero-sum' game for both sides, threatening the prerequisites of the 'win-win' strategy Russia and the United States once genuinely believed in. The decision of the Trump administration to pull out from INF treaty in February, as well as Putin's overt sabre-rattling during his annual state-of-the-nation address this year, underpin this assumption.

Therefore, going back to the issue of intensified dialogue between competitors, it appears that the wish behind the regular contacts between Washington and Moscow is to find 'common ground' for some kind of interaction. This approach implies deliberately avoiding sore points. This method though seems to be of little relevance,  unless the confronting sides seek mitigation and somewhat juxtaposition of their ideational differences.

Eduard Abrahamyan, PhD, is a Research Fellow at the University of Leicester, and a contributing regional security analyst at both the Washington-based Jamestown Foundation and the Central Asia-Caucasus Institute at AFPC. He is also a Rumsfeld Fellow of 2017.