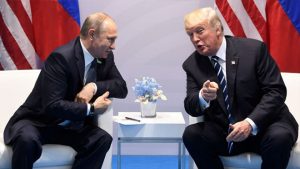 Mike Pompeo, US Secretary of State, unexpectedly cancelled the Moscow leg of his visit to Russia, which led to fresh debate about the crisis in US-Russian relations. At the moment, it is too early to assess Pompeo’s step or to eye conspiratorial motives, given that the meeting in Sochi with President Vladimir Putin finally took place. Following the results, the heads of the foreign affairs agencies of the two countries gave a press conference where they summarized the positions of Moscow and Washington on key issues like Venezuela and North Korea. As expaected, no major breakthroughs occurred; a rigid tone from both Lavrov and Pompeo does not leave room for positive expectations in the short term. The main positive achievement is the existence high-level dialogue in itself. Why has this meeting become possible, and can we expect core changes in US-Russian relations? Over the past couple of months, certain events have adjusted political dialogue between the two largest nuclear powers. The publication of the “Mueller Report” did not present any serious evidence for the collusion of Trump’s campaign team with Russian agents of influence. Some see this as an acquittal, even a harbinger of new hope for building pragmatic relations between Moscow and Washington.

Confidence in the Republican candidate’s guilt was a cornerstone of the post-Clinton Democratic Party’s political identity. The Democratic top brass were expecting solid evidence from the FBI’s former Director as an invitation to launch an impeachment procedure against Donald Trump. Trump can now breathe easier. Among his base, the episode could even now be spun positively. To date, Trump’s approval rating is growing. Now the Grand Old Party is confidently moving to re-elect its leader and return the party majority in the lower chamber. The irony is that “Russiagate” was supposed to destroy Trump; instead it breathed new life into him and his supporters.

In general, this fact is positive for Trump’s administration and the Russian authorities. It removed the main psychological barrier — namely that Putin “annointed” Trump and wielded undue influence over his campaign team. Though the ideological principles and settings of international policy of both leaders are not the same, they are still very close. The current philosophy of “Trumpism” is built on the basis of mixing elements of “Jacksonianism” (7th President Andrew Jackson) and neoconservatism. From the first, the Republican uses elements of protectionism in the economy as well as pragmatism and egoism in international affairs. “America First” is not just a populist slogan and a call to return to the conservative Goldwater-Reagan model. It is a change of course from a global order based on a democratic world theory (“democracies do not fight each other”) to a recognition of a multipolar world. Not only does this mean the return of national interests; it is also a significant blow to supranational institutions like the UN or regional bodies, which set the political rubrik after the end of the Cold War.

From neoconservatism, Trump borrowed the exclusivity of relations with Israel. Protecting the interests of the Holy Land comes from the demand of rich and organized evangelical voters. The conservative Israeli lobby provides crucial financial support to all the current Republican Party (the main donor is billionaire Sheldon Adelson). Jacksonianism ushers Republicans towards highlighting Celtic ties (Jackson was Irish through his father and Scottish through his mother) and conservative Jewish factors. Everything else is subject to the calculus of profitability and harm, even old allies in the EU and Asia (for example, Japan and South Korea). The key goal in foreign policy is to maintain and strengthen positions in international trade (the main adversary is China) and push out alien factors from the country’s zones of influence.

The Russian “Putinism” stands on the same conservative pillars. Over the past five years, Moscow has become a reference point for those political powers in the West that have become disillusioned with the model of liberal democracy. The growing influence of nationalist forces in Europe, Brexit, referendums in Scotland and Catalonia and the defeat of Hillary Clinton in 2016 in the States show that political trends are shifting to the right. It is here where Vladimir Putin has his strongest suit. Despite a large number of internal problems, “Putinism” has become an international phenomenon and an object of close study. An active Syrian campaign brought Moscow back to big geopolitics, and Russia is no longer going to leave it. In his article “The long-lasting state of Putin,” Vladislav Surkov, emphasizes that the course chosen by the current President will set guidelines in the long run. To date, the Kremlin is doing everything necessary to ensure that any future ruler will be just a manager of the “Putinism” course, not a their own navigator.

“Trumpism” and “Putinism” are equally based on the division of spheres of influence between great powers. In this regard, Washington is concerned about the activation (largely unseen since the Caribbean crisis of 1962) of Russian policy in the Monroe Doctrine zone. This Doctrine comes from the American continent being a zone of exclusive interests of the United States. Therefore, this excludes the possibility of geopolitical activity of other states (especially European ones). Undoubtedly, various countries played their political games in Latin America, including the Soviet Union (Cuba, Nicaragua, Guatemala). However, with the establishment of diplomatic relations between Cuba and the United States during Obama’s presidency, the collapse of the anti-American Bolivarian Alliance seemed imminent. At least, this was the impression, given that neither Russia nor China attempted to intervene in this process.

However, today’s America and Russia collided in Venezuela. Mass marches against Nicolas Maduro and the clear support of the young opposition leader Guaidó by the White House did not leave the old regime any chance for success. This configuration is a bit similar to the Syrian case; back then, prior to Russia’s intervention, leading experts and news media pundits kept predicting Bashar al-Assad regime’s end. The real result was completely different, and it not only gave Moscow confidence but also provided an incentive to counterattack rival territories. Trump’s call to Putin, where the Venezuelan crisis was discussed, had deep symbolic meaning. For the first time after the complicated Caribbean crisis, the President of the United States is discussing with Russia the possibilities of overcoming the crisis in the Monroe Doctrine zone. True, unlike Khrushchev, Putin is in a more privileged position that is supported not only by small countries but, for example, by Turkey – a member of NATO.

Venezuela itself is not of strategic significance for Russia. Nevertheless, it is here that the fate of the future architecture of international relations is determined. In Syria and Venezuela, one problem is being solved – to make the States take into account Russia’s opinion on key issues of international politics and recognize it not as a regional power (as Obama insisted) but as a global power. Indeed, “Putinism” in foreign affairs is an attempt to build a new system based on merging of such principles as sovereignty and non-interference in each other’s internal affairs (the Westphalian system), balance of power (the Vienna system) and spheres of influence (the Yalta-Potsdam system). Bidding will continue for an absolutely clear parameter – the post-Soviet space that has the same meaning for the Kremlin as the American continent for Washington. It is difficult to say what concessions the States are willing to make. But, most likely, they will have to make some. America’s active consultations with Russia indicate that the USA is no longer able to carry out its own decisive actions; it is forced to admit that the rhetoric of threats against the Kremlin is not that fruitful.

As already noted, “Trumpism” and “Putinism” are very similar in their essence, and this is what will bring the two countries closer and alienate them at the same time. On the one hand, these ideologies form realpolitik atmosphere for dialogue. On the other hand, the competition will only increase. Concessions can only be temporary and tactical; strategically, even in the multipolar world, there should be a first among equals.