What Kind of State Is Vladimir Putin Building? 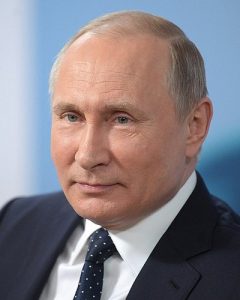 Recently, a Russian newspaper published an article by Vladislav Surkov, an advisor to the President of Russia. The piece was entitled “The long-lasting state of Putin.” In it, the Kremlin’s grey eminence explained the country’s current state and set coordinates of the long-term development of Russian statehood. What follows is an exploration of his views, not my own.

The author identified several types of empires that existed in Russian history: the state of Ivan the Third; the Empire of Peter the Great; Soviet Union of Lenin; and Russian Federation of Vladimir Putin. They had different social architecture and were formed in opposition to each other. In the era of Ivan the Third, the country freed itself from the Mongol-Tatar yoke; meantime, Moscow strengthened as a political center around which the fragmented principalities merged.

Since then, an absolute majority of Russian sovereigns (except for the Soviet period) considered themselves defenders of the Byzantine heritage and the Orthodox peoples. Peter the Great of the Romanov dynasty -- with German roots -- tried to demolish the archaic system of the Rurik dynasty and build a new Western-style empire. He made the long-held dream of his predecessors come true, providing access to the Baltic Sea and establishing a maritime connection with Europe. He did not sympathize with the Church and subordinated it to the state. It led to new political identity formula: “Orthodoxy. Autocracy. Nationality." It was no longer about secularism but about a state-oriented religion. The Bolsheviks destroyed all narratives associated with monarchy. They took the concept of international communism and created the Soviet identity.

Throughout its history, Russian statehood developed in a wave-like mode. It was also characterized by incompleteness: none of the strategic projects of Ivan the Third, Peter the Great or Vladimir Lenin was ever came to a logical end. All of them were destroyed with large losses of blood. The majority of the population were serfs until 1861 and did not actively participate in political life, relying on God's mercy and wisdom of the supreme ruler. This resulted in a deep abyss between the elite and the people.

With all the differences in internal perceptions of the nation and state, the three founding fathers of three three imperial models proceeded from the philosophy of the inevitability of territorial expansion and the special geopolitical mission of the Russian state. Ivan the Third managed to defeat the invincible Golden Horde; during the reign of Alexander I, Russia defeated the great army of Napoléon Bonaparte; the Soviet Union played a crucial role in the victory over Nazi Germany.

After the final fall of Napoleonic France, Russia was one of the initiators of forming new security architecture in Europe based on the principle of balance of power (the Vienna system). A similar situation was observed after the capitulation of the Third Reich and the entry of Soviet troops into Berlin. Moscow, which suffered the most human losses in this war, did not reject the proposals of the Allies on the anti-Hitler coalition, which led to creation of the UN and to the system of division of responsibility between the great powers.

The present and future of Russia cannot be understood without a clear vision of its past. According to Vladimir Putin, the USSR’s collapse occurred for a number of internal reasons. That is why Russians cannot accept it when people in the West speak of Russia's “defeat” in the Cold War. At some point, the new elites in Moscow thought that the country could be accepted into the Western family. This would end the confrontation that sucked all economic juices and at least twice (the Berlin and Cuban Missile crises) put humanity on the edge of nuclear war.

The liberal experiment crumbled when even the most loyal figures to the ideas of democracy embodied by “collective Yeltsin” realized that the EU had not been seeking to embrace Russia. Meantime, the United States expanded NATO and ignored Russia's opinion on significant issues, including the campaign against Saddam Hussein. Every step of the West disappointed supporters of democracy and strengthened the positions of conservative bloc led by Putin.

For the past twenty years, the West kept criticizing Russian authorities for human rights issues, non-transparent elections, and harassment of political opponents. All these problems existed. However, most of the reports on these topics did not consider many factors. Democracy is not a static achievement but an evolutionary process. The scale of democratization depends on a country’s specific circumstances. For example, it is impossible to prepare the conservative population of Russia for the idea that the state can allow same-sex marriage. Activists in large cities that share these ideas do not make even 10% of Russia’s population. The majority of Russians love their tzar and trust his course. That is why Putin's Russia is a long-lasting and serious matter.

Putinism and the model of Putin’s Russia are formed on the bases of the states of Ivan the Third, Peter the Great and Lenin. The main basis is the state's interest. For Putin, the state is not about only the social well-being of its citizens but also the protection of Russian civilization. He believes that economic success is a matter of time, so the priority is the state's territorial integrity. His logic is that Moscow’s interests are considered only when it behaves tough while its peaceful rhetoric is perceived as weakness. This explains his active strengthening of the armed forces and special services. Another important element is religion. Putin pays attention to all religious denominations. Like many rulers of Russia, he regards Orthodoxy as the instrument of uniting the Russian people, the state-builders.

According to Putinism, Moscow’s global mission is to protect conservative values. In this sense, Putin is not opposing his country to the West. He believes that modern Russia is the guardian of real Christian conservative European values. The EU’s failures in domestic and foreign policy led to a deep crisis in its organization and questioned the feasibility of integration project model as a tool for solving problems. Brexit, the victory of right-wing movements in Europe, and the triumph of Jacksonian conservative Donald Trump were indicators of systemic changes in world politics. Liberal Democrats do not want to believe that these events are the result of internal social demands. They actively promote the image of Putin as a new “godfather” of nationalism. He is not. He is the last of the pleiad of such leaders as Ronald Reagan and George H.W. Bush.

Success in Syria and active Russian politics in Asia, Africa and Venezuela show that the new system of international relations will no longer ignore Moscow as a factor. For Vladimir Putin, it is important that the great powers return to some principles of past systems: sovereignty and non-interference in each other’s internal affairs (the Westphalian system); balance of power (the Vienna system); and spheres of influence (the Yalta-Potsdam architecture). At the first stage, the “long-lasting state” of Putin will be formed in its natural geopolitical area. The main zone of influence is the post-Soviet space, which Putin’s Russia will not surrender.

There are many reasons for this. Firstly, not a single Western power will enter into an open confrontation with Russia for these countries. Secondly, in the battle of democracy with geography, the latter wins. Moscow has the advantage of deeper knowledge of these countries and peoples. Thirdly, the post-Soviet peoples who are promised democracy and better future lose their patience.

As its influence grows and Western countries' influence falls, Russia will gather back fragments of its empire and expand its geopolitical impact. This is the natural condition of Russian statehood from the moment of its appearance to the present day. Therefore, it is wrong to assume that Vladimir Putin bent Russia to his will. On the contrary, Russia has subsumed him to itself.